Apparently IE does not render CSS correctly like it should (surprise surprise) and is not displaying my rollover buttons.

Well, the buttons are being displayed, but there is no rollover state to them. If you view my website in Firefox, or any other browser except IE:

Here is the CSS and HTML in question:

And here is my entire stylesheet and html for the main page:

Your browser does not support iframes. 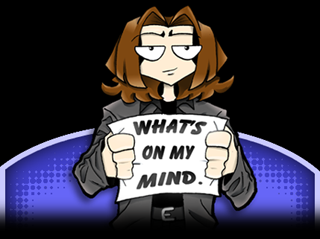 Your browser does not support iframes.

hosted on Comic Genesis, a free webhosting and site

I think the reason for this is because in all the other buttons, I have the css id included in a link tag, but in the comic navigation buttons they're included in a div and I think that's the problem IE is having (And keep in mind I have IE 8 and this is still a problem).

The reason I did this differently is because what the DIV tag is wrapped around.

I can't include a link tag wrapped around it, because ***first_day*** is a template tag that the site my comic is hosted on uses and is rendered as its own link so it would be wrapping a link tag around a preexisting link (which I even tried) and it just messes everything up.

I would like to keep CSS rollovers, since they seem to be better than javascript rollovers. So I was wondering if there was a way to make it work in IE without including the CSS id in a link tag wrapped around the comic nav buttons. I know most people now don't even use IE, I just want my site to be the same in all browsers.

And if you really read all that then congratulations. And thank you.

You very badly need to

You very badly need to validate your code, frankly it's a mess. The very first two lines of a document are a DTD statement and the parent document node 'html' you have half a lifetime of code before either of these two figure.

Please run your page through the W3C validator for markup not CSS, see what if any errors you can sort out. If the code is generated by your hosting service
<center>***advertisement***</center> this should not be on the page where it is if at all, then you will need to change to a real host that doesn't insert junk into your pages.