I have a nice xHTML 1.0 form that I would like to use on my otherwise CSS based site. IS there a HTML-CSS converter, so I can just change the form to CSS style. Or a CSS form generator?

So I have to find a cat who

So I have to find a cat who likes cheeseburgers? And it will magically convert my form?

Show us what you have and

Show us what you have and tell us what's wrong with it. That'd probably be a better way to get things done.

Well, I have a big HTML

Well, I have a big HTML form, and I want to convert it from table based to CSS based. I think I'll just do it manually, but a converter would help

There are no magic

There are no magic converters, how would they know what to remove and what to add?

Make a copy of your page, strip out all the crap, and recode the form using semantic form elements.

Actualy, it is really quite

Actualy, it is really quite possible to do that, and I found a free trial for one. There are perfect HTML to XHTML converters and vice versa, so it's certainly possible to do something like this.

Its called Tablle2CSS, but it costs money, which is a pity

Tools like that are not to be taken seriously really and you shouldn't be harking after such a thing if you are interested in coding. The very mention that it is a SEO tool tells us enough.

It will not turn out wonderful code, this simply isn't possible, and you shouldn't really be looking at such 'tools', don't look for short cuts. Converting a table based page to semantic markup is something that requires a necessary decision process on the part of the human coder, a 'tool' can only make a series of fixed decisions, that may or may not be correct or 'best'

I just wanted to save time.

I just wanted to save time. It did OK, but still needed some manual modifications....

Post up a small snippet of the markup it generated before you set about making manual adjustments.

Wel, it didn't d overally great, but was good enough, focussed more on

The CSS style came out no problem:

And did it generate a

And did it generate a DTD?

It has used the font tag which is bad (or was that there before?) it has used deprecated valign atribute etc.

These sorts of 'tools' will generally not create good markup as they can't really tell what semantic elements should be used and will use divs far too much along with, generally far too many badly named classes, as styling using the more correct initial approach using descendent selector groups simply isn't possible for a 'tool' to generate.

At the end of the day if you are making around 70% changes to the generated code then you might as well have done it from scratch. Efficient coding is a manual process!

Besides, it looks like all that it did was replace the table cells with non-semantic divs.

That's all it did, so I had

That's all it did, so I had to make spans and all that myself. I wonder who would pay 30 bucks for it.....even if I wanted the full version I'd just use coughP2Pcough

Replacing table cells with divs is what I'm on about , that is not a real conversion, and putting in spans isn't either, it is why generally we will always make a blanket statement such as 'There are no conversion tools' CSS and Markup can not be automated, not if you want meaningful semantic markup, and if one doesn't want that then stick to the table layout

The people who would pay money for this are the legions of people who haven't a clue about coding and aren't interested in learning, they probably have two dozen adsense sites in an attempt to milk the internet for some easy cash, they are aware that SEO is the most important thing in the universe, they have a understanding that equally important above all else is their page rank and have heard that tables will not gain them the best ranking hurting their earnings , so they would turn to this type of software, and it is to them that this application is aimed, if you want to taken seriously as a coder do not, I repeat, do not use or at least admit to using such applications

Oh poo! So, are you saying I'm wasting my time building this web designing robot? 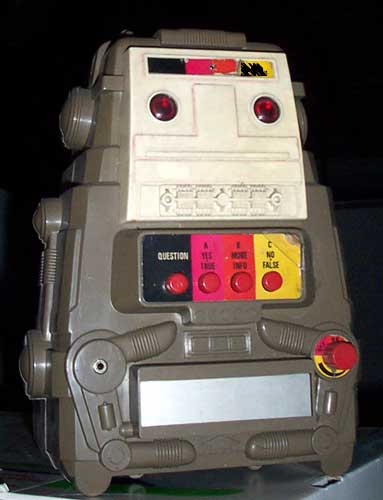 Oh please hurry up and

Oh please hurry up and finish him then I could leave him to it while I went and had a pic-nic and snooze in the park, it's a lovely day, and I'm doing this silly code stuff stuck indoors.

The typing looks fine to me :? perhaps he shouldn't be shouting though?

That's all it did, so I had to make spans and all that myself.

Sounds like you need to do a bit of reading up on how to markup forms correctly: http://www.sitepoint.com/article/fancy-form-design-css

Actualy, it is really quite possible to do that, and I found a free trial for one. There are perfect HTML to XHTML converters and vice versa, so it's certainly possible to do something like this.

First of all, tell him he should be using strong or em rather then the B tag, then explain how to tag them.

Then as much as he wants to 'Kill Huminz', we get the message the first time. Repeating the B tag multiple times isn't going to make us anymore aware that creating him will doom us all then if he just said it once.

I eagerly await his birth...